The Trip to Moissac – Being There and Feeling There

The first moment when I stepped out of the train station in the afternoon of February 22, I felt that the trip to Moissac was going to be special. The cool air was crystal clean, saturated by golden sunlight and the faint smell of faraway fireplaces. No more close-knitted houses with well-decorated balcony, and no more busy streets lined by a rich variety of modern shops. Moissac is simpler and more peaceful than Toulouse. Here the road is widely open before us, lined by small brick houses with plain red roofs and lovely chimneys. Now and then clusters of winter trees with scant leaves and abundant branches appear in the interval of small houses. In their gray and dark green canopy one could sometimes catch a glimpse of a beautiful mansion, which stood on the small uplands. As we walked towards our hotel, the roads were leading upwards, as if we were heading towards the top of a hill.

After walking up a steep slope, we are literally on the top of everything: under the clear blue sky there is a magnificent view of brick roofs and dark green trees, with the flowing Garonne River clearly visible in the distance. Turning away from the view we saw a stone cross, which marks the entrance to the International Housing Center, our “hotel”. What I love the most about the hotel is the nice “common room” on the first floor where we gathered everyday to discuss, to watch movies, and to eat breakfasts and dinners together. Painted on the front wall of the room is a huge tree whose branches resemble the roads of Moissac, leading towards different lovely places and situated in a refreshingly idyllic environment. Then there is the inviting fireplace with nice chairs and cushions. The firewood would be gently burning every night when we squeezed together lovingly like a family. Afterwards when we got back to our room upstairs, we would find that our hairs have the faint smell of firewood. 🙂

What is also interesting to me is the farm we have visited, which gave me the impression of Moissac as especially idyllic. The one farm that all of us have visited is a small one, but the rolling dry weeds and the array of well-tended fruit trees greatly impressed me with their natural beauty, especially in the nice afternoon sunlight. We sat in an old house, which belongs to the mother of Bernard Redon, the farm owner. A nice interview was carried out in the sweet smell of apple juice made from the fresh apples of the farm. The old mother who spoke French with a heavy Occitan accent gave me a sense of going back to an old era when life was simple and everyone was content. Sitting in an old house situated in the beautiful countryside was a truly enjoyable experience, even if I did not understand most of the conversations carried out in French.

Besides physically enjoying the environment of Moissac, we also enriched our knowledge of the subject of immigration. Our interview with the mayor of Moissac: Monsieur Nunzi, is one of the best intellectual experiences we had in Moissac. The mayor is an in-depth observer of the phenomena of immigration in France, especially in Moissac. In his talk we could see a broad perspective on the problem of North African immigrants’ integration in French society. In terms of gender division, the mayor told us several stories about how Muslim women lose freedom when they get married and how religious pressure and patriarchal family repress them. These factors fundamentally limited the female immigrants’ ability to totally integrate into the French society. In terms of generational division, religion poses barriers to young Muslim immigrants’ integration. In his opinion, for the integration of younger immigrant generations, race is a problem that could be overcomed. The real problems exist in the ingrained cultural and religious differences between host culture and culture of origin. These observations are interesting and have provided new perspectives to our study.

The trip to Moissac did turn out to be unique, as I have predicted at the first moment when I stepped out of the train station. The bright, fresh, and peaceful impression Moissac has left to me and the rich memory of field works combine to make this trip the highlight of my staying in France. 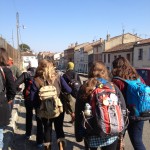 The first moment in Moissac 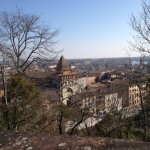 The view of Moissac seen from our hotel 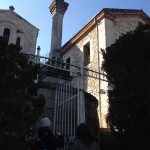 The stone cross at the gate of the hotel 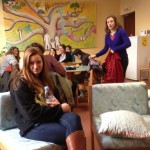 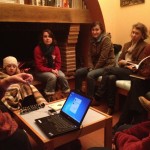 The fireplace of our hotel 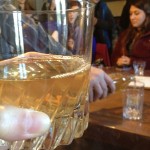 The apple juice of the farm 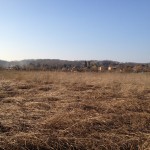 This entry was posted in student-stories and tagged Moissac. Bookmark the permalink.